In November of 2020, CDRPC undertook an analysis of Sales Tax Revenues in the 8-county Capital Region. The analysis noted that as of October 2020, after experiencing a decline immediately after the pandemic, sales tax revenues across the region were recovering well. With sales tax revenue data through April 2021, CDRPC has noted improvements above pre-pandemic levels for all the Greater Capital Region counties. In December 2020 as well as March and April 2021, tax revenues across the region have been higher than in any of those same months over the past three years. Overall, the average monthly sales tax revenue for the Greater Capital Region has been increasing.

The Greater Capital Region counties saw high sales tax revenues in December 2020 and March 2021 that have been higher than revenues in those same months over the past three years. For example, in Albany County, December 2020’s revenues saw a huge jump to over $30 million, the second-highest single month total since 2017. This was the case for the region overall, with December 2020 representing either the largest or second-largest months in terms of revenue over the past three years. Columbia, Greene, Rensselaer, Saratoga, Schenectady, and Washington counties all saw their second-highest months since 2018 in December 2020.

March and April 2021 saw revenues increasing again, with both months rising above not only the levels seen in 2020 but also the levels seen in 2019 and 2018 throughout the region. While sales tax revenue can vary month to month, overall revenues in the region have been increasing since 2018. Looking at the combined tax revenue sums for the eight counties, the average monthly total has been increasing since the pandemic took effect in April and May 2020. September 2020, December 2020, and March 2021 all saw significantly higher totals than any of those months have seen since 2017. 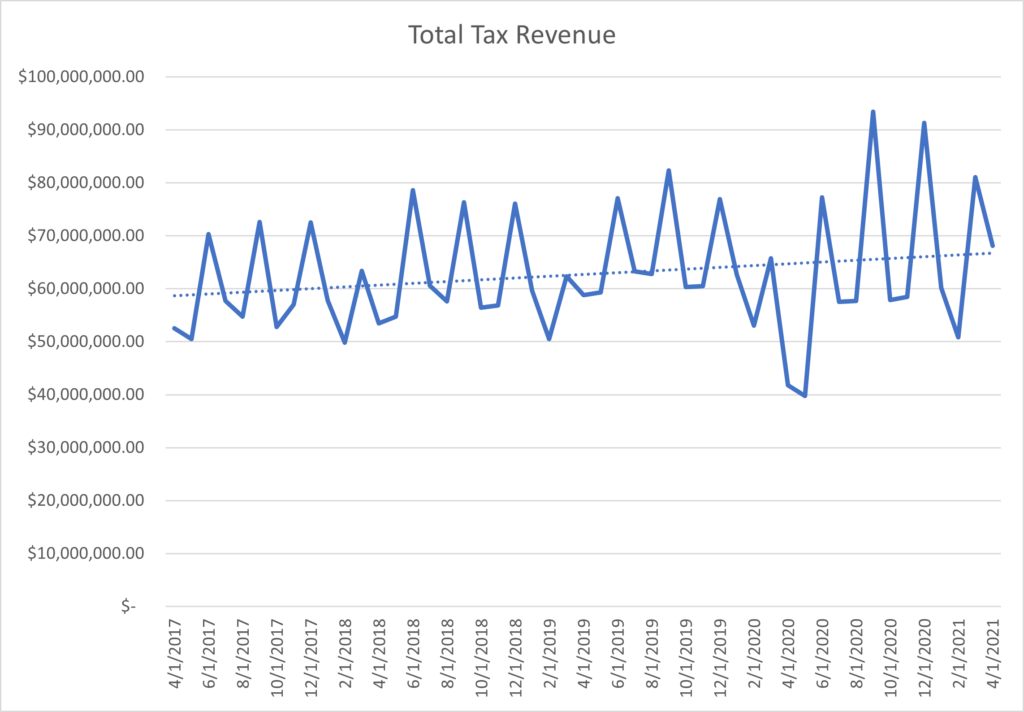