There are two important data releases taking place in September to keep an eye on, as they will provide incredibly useful data and trends for local governments, planners, and anyone else who uses Census data.

The American Community survey, unlike the Decennial Census, is an ongoing survey sent out the households across the United States that gathers data that is constantly updated on 1- and 5-year compilations. Collected over a 12-month period from January to December, 1-Year estimates provide the most current available estimates on a range of topics for areas with populations greater than 65,000 across the country. 1-Year data typically has high margins of errors, as the estimates are made based off of small sample sizes for each area they record data for, but is still useful for identifying trends and updating estimates between Decennial Censuses. This data is most useful for analyzing large populations and when the most up to date data is needed.

5-Year data is collected over a 60-month period and provides the most reliable data outside of the Decennial Census. This data is considered to be more reliable because it utilizes larger sample sizes of surveys and compiles responses over a five-year period. 5-Year data is available for all areas throughout the country regardless of size. The Detailed Tables, Data Profiles, and Summary File for the newest 5-Year data (2014-2018) will be released on December 19, 2019. The Comparison Profiles, Subject Tables, and Narrative Profiles will be released on January 16, 2020.

Both the 1-Year and 5-Year ACS data contain information regarding a variety of topics. With over 40 questions on the survey, each question attempts to develop information on important individual and household information that helps users gain a better understanding of the makeup of our communities and the people that live in them. For information on why each question is asked, check out the Census Bureau’s explanations here.

• The Table & Geography Changes page explains new, modified, and removed tables, as well as information on changes to geography.
• The Code Lists, Definitions, and Accuracy page includes code lists, subject definitions, group quarters definitions, and the statistical testing tool.
• The Summary File Documentation page includes the new handbook, table shells, and sequence/table number lookup files.
• Table Shells display the layout of the tables without the estimates or margins of error filled in. This year, we have also compiled Tables Lists. This will allow users to explore all the ACS tables, including table IDs, titles, universes, as well as 1-year/5-year availability, in one spreadsheet.
• The Geography Boundaries by Year page shows which vintage of geography the 2018 ACS 1-year estimates are based on.
• The Areas Published page lists the total number of geographic areas that receive 2018 ACS 1-year estimates. An excel file also details the specific geographies that have published data.
• The ACS Data User Handbooks and Training Presentations are continuously being updated. These resources provide recent and relevant information about the ACS and its data products.

Make sure to contact CDRPC with any questions about the 2018 ACS 1-Year data, or any other Census Data.

The newest Economic Census will consist of data collected for 2017 and will provide an updated look at the U.S. economy since the 2012 Economic Census. Surveys were sent out in May 2018 with a response due date of June 12, 2018. This was done to ensure that businesses had complete data for the previous year, 2017. All of the data collected for the 2017 Economic Census will not be released all at the same time however. Beginning in September 2019, data will begin to be released and will continue to roll out through December 2021. The first release of the 2017 Economic Census came on September 19th with the First Look data. This initial data is on the national level and provides information on the number of businesses, employment, annual payroll, and revenue organized by NAICS code. In January 2020, the Census will begin to release the local area data collected in the Economic Census. This data will be available at the national, state, metro area, county, and place levels. Some sectors, such as Utilities, will not be shown at every geographic level. This data will be released on a sector by sector basis, with all sectors being released by December 2020. For further details on what will be released and when, check out the Census Bureau’s release schedule here. An example of the data in the 2017 Economic Census regarding the number of establishments in the United States  can be seen here: 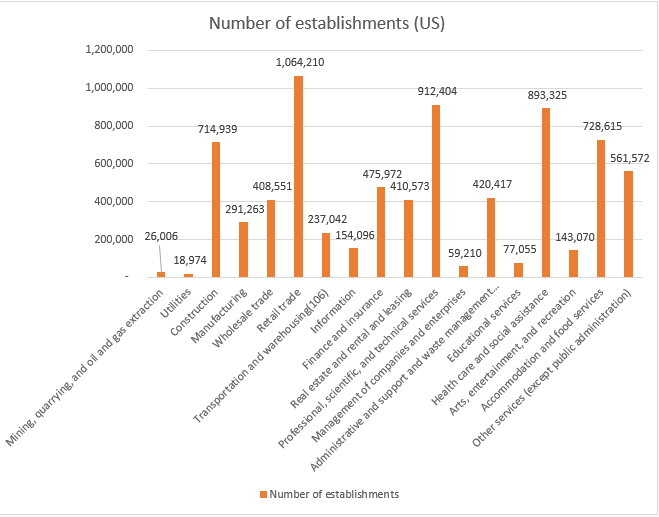 To help prepare for the 2017 Economic Census, the Census Bureau released a webinar previewing and explaining the new data release and how to navigate it. You can check out the webinar here. 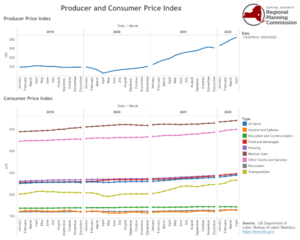