Changes to the Capital District’s Cost of Living

What is the Cost of Living Index?

Compiled by the Council for Community and Economic Research, the Cost of Living (COLI) Index collects data from cities across the country and tracks changes in the cost of vital goods and services that contribute to an overall cost of living. Data on the cost of Grocery Items, Health Care, Housing, Miscellaneous Goods and Services, Transportation, and Utilities are collected and compiled into separate indexes, and a Composite Index is created which combines these separate indexes and shows the general trend for the cost of living in different cities and metropolitan areas. The data for the Capital Region is collected quarterly by graduate students enrolled in the Department of Geography and Planning at the University at Albany and is funded through a partnership among CDRPC, the Capital Region Chamber of Commerce, and the Center for Economic Growth. The methodology, data requirements and parameters of the data collected are consistent nationwide to assure comparability among the participating regions.

When data is collected, it is converted to a scale which puts the average cost for each index at 100. Data for the Capital District is collected for the Albany-Schenectady-Troy Metropolitan Statistical Area. This allows us to compare the cost of living in the Albany-Schenectady-Troy area to any other city or metropolitan area in the country, regardless of size or population. For example, the cost of living in Manhattan, which topped the Q2 2019 national list, is 242.5. This is 135.5 higher percentage points more than the cost of living in New York’s Capital Region. The lowest cost of living for this quarter was in Harlingen, Texas with an index of 73.8. If a city or metropolitan’s index is over 100, then the cost of that index is higher than the national average. You can learn more about the COLI Index here. Below you can see comparisons between the Capital Region and other peer areas for Q2 2019. 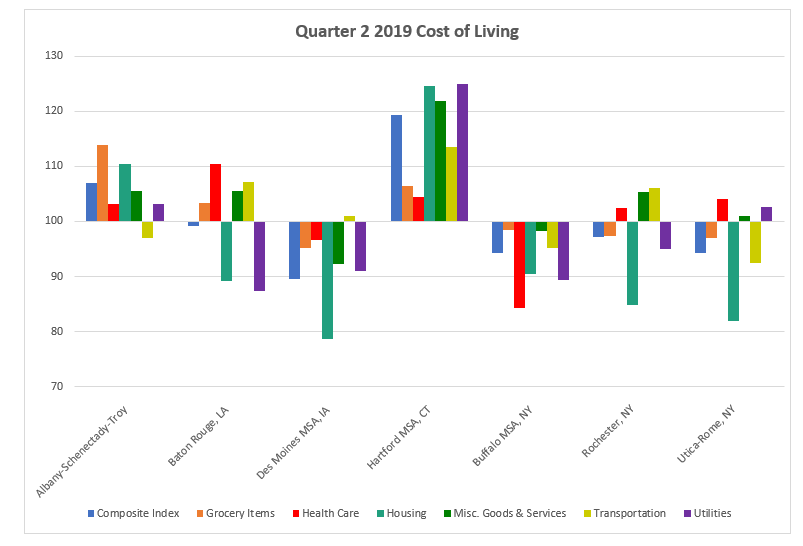 Last year, CDRPC provided an update on the 2018 Quarter 1 (Q1) Cost of Living Index provided on our website, in which we determined that the cost of living in the region had remained generally stable. That article can be viewed here. With current data through Quarter 2 of 2019, we can take a look at the last year of data to compare how the cost of living for various indexes has changed over the past year.

The peer MSAs for this comparison were chosen based on selections made in the 2015 Capital Region Indicators Report. Sections were made based on two criteria;

Based on this criteria, 11 MSA were chosen as peer MSA, and the Buffalo, Rochester, and Utica MSAs were included because they are major cities in Upstate New York.