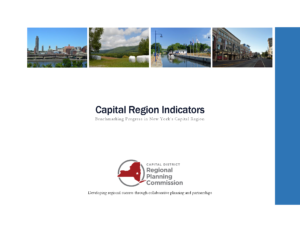 CDRPC has released its latest report, Capital Region Indicators, on its website.  This report compliments our work from 2015, Capital Region Statistical Report, and allows for a comparison of our region against a set of peer regions from both across the United States and within New York State.

This Report primarily relies on a time series comparison of five-year data from the American Community Survey (ACS), which is an ongoing effort by the US Census Bureau to collect detailed information about the US population.  The ACS replaced the Census Bureau’s Long Form which was only used in each decennial census.  The ACS is an annual survey of the United States which provides for a timely examination at critical information about people and our economy.

In addition, though they do not meet the selection criteria, we have also included Buffalo, Rochester, and Syracuse, NY, because they are major cities in Upstate New York.

Thus, the peer group includes a total of fourteen MSAs listed below:

For each topical area, we use indicators from the Capital Region Statistical Report. For most indicators, we compare data from the 2005-2009 American Community Survey (ACS) five-year summary and the 2010-2014 ACS five-year summary. When data is not available from the ACS, we obtained data from other sources as explained in the following sections.