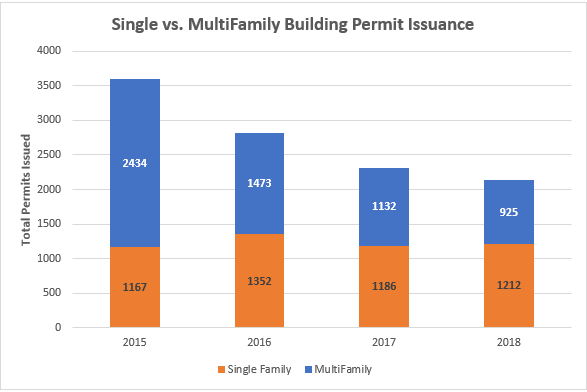 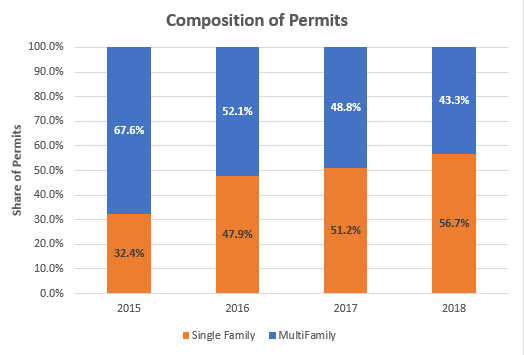 While we know the total number of permits issues throughout the region, the pace of development varies greatly throughout the region. From 2008 through 2018, Colonie issued by far the most permits, with 4,070 total permits issued, followed by Halfmoon (2,257), Saratoga Springs (1,522), Albany (1,204), and Bethlehem (1,202). For Colonie, Halfmoon, and Bethlehem, half or most of these permits were for single-family residential units with 2,436 in Colonie, 1,446 in Halfmoon, and 604 in Bethlehem. Saratoga Springs and Albany saw a much higher rate of multi-family permits issued with 1,045 in Saratoga Springs and 933 in Albany over ten years. These are the only communities that issued over 1,000 permits over the ten-year period, however many communities issued between 800 and 1,000 permits as well over this ten-year period. Check out the map below for a comprehensive look at permit issuance in Capital Region communities.

In 2018, Colonie (380), Saratoga Springs (242) and Halfmoon (161) again saw the most permits issued, with Stillwater (146) and Guilderland (140) close behind. Of these communities, Colonie and Halfmoon saw the largest share of single-family permits with 218 in Colonie and 159 in Halfmoon. Larger shares of multi-family permits were seen in Saratoga Springs (162), Guilderland (108), and Stillwater (96). Ballston, Rotterdam, and Albany also issued over 100 total permits in 2018. For a detailed breakdown of each community’s permit issuance between 2008 and 2018, check out the table below.

Existing Housing Trends Throughout the Region

In both the Capital Region and across the country, both sales and inventory of existing homes are down. According to reports in 2018 and 2019 from the Greater Capital Association of Realtors, In 2018 the Capital Region saw fewer existing homes being sold coupled with increased sales prices and declines in sales of homes. Due to the lack of available homes, prices of each available home increased with fewer homes were sold, making it more difficult for first-time homeowners to purchase a new home. Along with a lower supply, increased sale prices can also be associated with a higher demand to purchase homes in the region.

These factors create barriers for people who want to purchase homes and helps to build up demand for new residential construction. Lower inventories and high demand for homes in the Capital Region could help generate higher building permit issuance then we have seen over the past two years.