The Erastus Corning, 2nd Achievement Awards for Intermunicipal Cooperation recognize municipalities and organizations whose efforts have significantly contributed to the advancement of intermunicipal and interagency cooperation and regional planning. The awards ceremony took place in Albany on Thursday, October 27th, 2022. The award-winning initiatives, municipalities and organizations include:

Thanks to Ross Farrell and Jeremy Smith from CDTA. 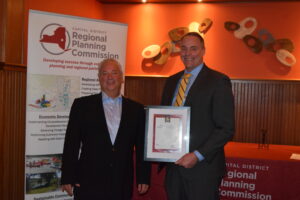 Schenectady County, with contractor DSD Renewables, recently completed the last of the seven solar arrays commissioned through the Schenectady County Solar Energy Consortium. This last facility, along the Thruway at Rynex Corners Road in Rotterdam, is one of the most powerful of the seven, rated at 4.5 megawatts.

The seven installations total about 25 megawatts of capacity, enough to power all operations by the county, city and town governments.

Thanks to Rory Fluman, Schenectady County. 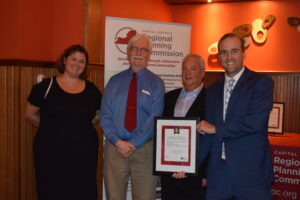 The awards are named in honor of CDRPC’s first Chairman, Erastus Corning, 2nd, Mayor of the City of Albany from 1942-1983, and recognize initiatives that involved at least two local jurisdictions or entities within the four-county region. Nominations were reviewed by a Committee and evaluated using the following criteria:
The project has achieved significant benefits, efficiency or cost-savings;
Involves two or more local entities, municipalities non-profits etc.;
Community involvement and support.
Degree of innovative solutions to overcome challenges.

For individual awards, the nomination must demonstrate the individual’s significant contribution to advancing intermunicipal partnerships.

This event is made possible in part by generous support from Hodgson Russ, LLP.