PLEASE NOTE: WE HAVE A NEW WEBSITE AND WILL NO LONGER BE UPDATING THIS PAGE.

The Capital District Regional Planning Commission has taken the lead in organizing a consortium to develop a comprehensive inter-municipal Phase I Long-Term Control Plan (LTCP) for Combined Sewer Overflows (CSO: overflows from combined storm & sanitary sewers) discharging into the Hudson River Estuary. The participating Albany Pool communities are the Albany Water Board; the cities of Cohoes, Rensselaer, Troy and Watervliet; and the Village of Green Island. Each community currently has its own State Pollutant Discharge Elimination System (SPDES) permit. The Albany & Rensselaer County Sewer Districts are also partners in the consortium. Check out the Albany Pool Communities CSO LTCP Brochure Scroll down for status updates and reports.

What are Combined Sewers?

Combined sewer systems (CSS) are sewer systems that are designed to collect storm water runoff, domestic sewage, and industrial wastewater in the same pipe and bring it to the publicly owned treatment works (POTW) facilities.

During rain events, when storm water enters the sewers, the capacity of the sewer system may be exceeded and the excess water will be discharged directly to a waterbody (rivers, streams, estuaries, and coastal waters). 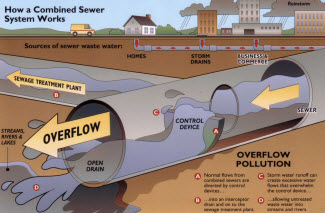 The untreated water may contain untreated sewage that may impact human health. For information about the general CSO wet weather advisory and links to the CSO outfall map visit the CSO Wet Weather Advisory web page.

The Albany Pool of the Hudson River currently has 92 Combined Sewer Overflow points. Combined sewer systems are designed to discharge directly to surface bodies of water such as rivers, estuaries, and coastal waters during wet weather when total flows exceed the capacity of the combined sewer system or the treatment plant.

In 2007, the Pool Communities began working together to develop a joint Long Term Control Plan. The plan was created to study the current health of the Hudson River, identify programs and projects that will aid in the clean-up of the river, and through a sophisticated modeling system and post construction testing program, and demonstrate the effectiveness of the program.

Working with the Department of Environmental Conservation, the Pool will implement more than 50 projects and programs that will significantly improve the water quality of the Hudson River and its tributaries.

As the program is implemented, further sampling and analysis of the Hudson River and its tributaries will take place, allowing the Albany Pool Communities to measure the ongoing success of the program.

The Albany Pool Communities have jointly developed this web-based information service that provides easy access to alerts for potential for CSO activity in the Capital region. Visit the website at www.albanypool.org.