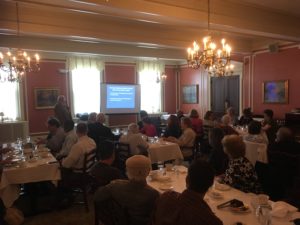 The Capital District Regional Planning Commission (CDRPC) is launching a speaker series, CDRPC@50, to commemorate its 50th anniversary in 2017, co-presented by the University Club of Albany Foundation.

These events are open to the public and presented by the Capital District Regional Planning Commission (CDRPC) and the University Club of Albany Foundation, Inc. One need not be a member of either organization to attend. If your municipality has passed a resolution accepting CDRPC as a training provider, this event will meet the State law for Planning and Zoning Boards continuing education requirements (sample resolutions available upon request). A certificate of attendance will be provided to Planning and Zoning Board attendees. Certification Maintenance credits may also be available for members of the American Institute of Certified Planners.

In his talk, Lyons will be discussing the Albany County Water Purification District, a regional entity that for almost 50 years has provided effective and efficient transportation and treatment of wastewater. He will also discuss the challenges of regulatory compliance while addressing the needs of aging infrastructure and human capital.

Richard Lyons has worked for the Albany County Sewer District for over 40 years; in June 2015, he retired as executive director and now works part time as a project manager. Lyons also serves on the county Energy Advisory Group and as president of the Local Development Corporation, which governs the implementation of the Albany Pool Combined Sewer Overflow Long Term Control Plan. In 2016 he was appointed by Governor Cuomo as a non-agency commissioner to the New England Interstate Water Pollution Control Commission and was president of the New York Water Environment Association in 2012. Lyons has received numerous awards from NYWEA, WEF and the American Public Works Association.

June 23, 2017 – Dr. Gene Bunnell, “Hoping for an Albany Turn Around?  What Albany Can Learn from Providence’s Experience”

The Mohawk Hudson Land Conservancy is celebrating 25 years of working to preserve lands in Albany Schenectady and Montgomery counties. King will provide an overview of the many activities of the Conservancy including their preserves, farmland protection, climate change and resiliency efforts, and the Helderberg Hudson Rail Trail.

Thyag discussed how planning has retooled to address the components of sustainability, including: the environment, economy, transportation issues, land use change, community development and resource conservation. Attendees will learned how planners at the local, regional and statewide levels use these tools to make better decisions about our built and natural environments.

In the fourth CDRPC@50 speaker series, David Hochfelder, Ph.D., presented “Selling the South Mall” which discussed the people displaced and the structures demolished to make way for the Empire State Plaza. David is a a co-founder of 98 Acres in Albany, a digital history of urban renewal in Albany, NY.

The 98 Acres in Albany research project has drawn on government documents, oral histories, and local reporting, and tells the stories of the land seized by the State, before demolition and during construction of the Empire State Plaza. Roughly 7,000 people and 400 businesses were displaced and 1,150 structures demolished in the process. In their wake, an army of architects, contractors, and construction workers moved in. In combination with a book of photo-essays to be published by SUNY Press, the team plans to use GIS software to digitally reconstruct and repopulate Albany’s lost 98 acres.