The American Community Survey (ACS) is a product from the US Census Bureau that replaced the Decennial long form. The data tables (Summary File 3) that were prepared from the responses to detailed questions included on the Decennial long form are no longer be available as part of the 2010 Census since every household will only received a short form. With the elimination of the long form, detailed characteristics of the population will be derived from the results of the data collected only through the annual American Community Survey which is sent to 250,000 households nationwide on a monthly basis. There are significant differences between the long form and the ACS and we recommend that data users exercise extreme caution when comparing ACS data with 2000 decennial data. The following are some of the more significant guidelines that should be followed when using the ACS data.

NOTE:  For the following ACS Demographic Profiles, please contact us: 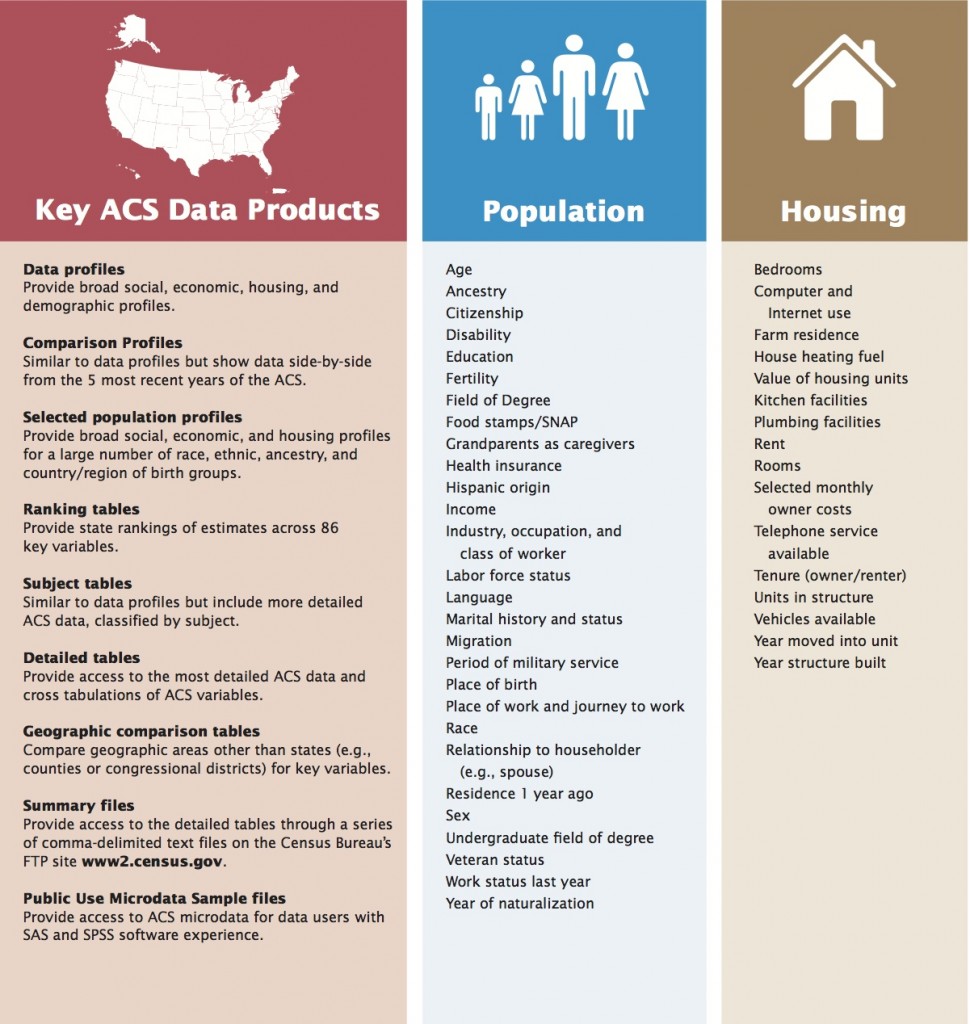 Whereas the 2000 data derived from the long form was an estimate of the population at a specific point in time, the ACS is a period estimate; that is, the survey is issued to a much smaller sample on a monthly basis, which are then pooled into one, three, and five year periods. Due to the small sample size, one, three, and five year estimates are only available for communities greater than 65,000, three and five year estimates are available for communities greater than 20,000 population, and only five year estimates will be available beginning in 2010 for geographic areas, including census tracts and block groups, with a population of less than 20,000. When discussing the multi-year period estimates, the best way to characterize the data is to state that the data cover a period of years, rather than use the year of release. For example, for a 3-year estimate, released in 2008, the data might be characterized as, “The poverty rate in this community over the period 2005-2007 was X”.

Why We Prefer 5-year Data

While 1-year data, when available, is more current, the smaller sample size means that it is also less accurate and often highly volatile year-to-year. Which period estimate is used may ultimately be determined by programming agencies; however CDRPC considers accuracy to be more important than timeliness for most uses, and indeed using inaccurate data could have harmful and detrimental effects on local programming and analytical needs. For that reason, we recommend whenever possible that the 5-year data be used to ensure the most accurate data.

Because of the accuracy issues, the US Census Bureau is publishing the margins of error (MOE) or ranges for all ACS estimates at the 90% confidence level. It may be more helpful to express an estimate as a range rather than a single number with an MOE. The Census Bureau ACS guidebooks recommend using extreme caution in using any estimate where the MOE is 10% or more of the estimate. You might also consider the size of the MOE in comparison to the total population in the area under analysis

When comparing the ACS estimates to the 2000 Census data, make sure that the questions are comparable — a table showing those items that can be compared is available at the US Census website. As examples, the ACS definition of place of residence differs significantly from the Census, which can have considerable impact on the population data for areas that experience seasonal housing changes due to universities, large number of vacation homes, etc. Additionally, the ACS data collected up to 2005 did not include a survey of group quarters and therefore comparing estimates should be performed with caution after reviewing the US Census Bureau’s comparability charts.